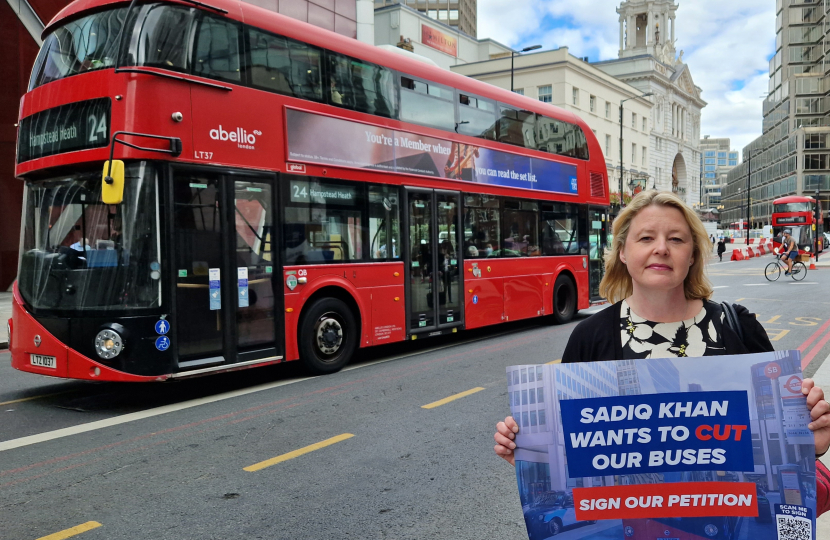 The Mayor of London's consultation on our bus network has now closed, but Nickie is continuing her campaign to Save Our Buses across the Cities of London and Westminster, sign her petition below. Check back on this page later this year to find out Transport for London's response and their next steps. Nickie thanks everyone across the Two Cities who stood up and made their voices heard during this critical consultation. Continue reading to find out what the Mayor's plan could mean for you.

Mayor of London, Sadiq Khan, and Transport for London have proposed plans to abolish 22 entire bus routes across London.

Further, route 211, connecting Pimlico, Victoria and Westminster to Chelsea and Westminster Hospital, Royal Brompton Hospital, Royal Marsden Hospital and Charing Cross Hospital is set to be changed. The Mayor is proposing the route starts at Battersea Power Station, cutting out Pimlico, Victoria and Westminster altogether. This will have a detrimental impact on everyone living in St James's, Vincent Square, Pimlico North and Knightsbridge & Belgravia wards as well as nearby communities like Pimlico South ward who rely on the route to get to our nearby hospitals for their own appointment, to support friends and relatives at their appointment, or to visit a loved one at the hospital.

Route 14, another pivotal route to Chelsea and Westminster Hospital, Royal Brompton Hospital and Royal Marsden Hospital, is set to be scrapped entirely.

Many local people rely on these buses to get to work, to medical appointments, to school, to college or to the shops. The disruption to these established routes means forcing people back to using cars, expensive taxis and private hire vehicles, or cause massively increased travel times using busier buses, with day-to-day commuters, disabled people and parents with pushchairs vying for limited space.

The Mayor claims this is about money. It isn’t. Transport for London has already received support throughout the pandemic totalling £5 billion, the largest single recipient of pandemic support across the transport sector.

Whilst the Mayor professes he wants a long-term funding deal for TfL, his actions have often proved to the contrary. In November 2021, the Mayor was supposed to send the Government a detailed plan for making TfL financially sustainable. This plan was not received until December, at which point it was over three weeks late. While the Mayor should have been coming up with a plan to cut costs, he was instead issuing press releases threatening to scrap bus routes and close Tube Lines.

The Government has been clear that it would cover the cost of Covid, but not the cost of Khan. The Mayor has repeatedly been warned that his decisions would put Transport for London on a less secure financial footing and inevitably lead to undesirable cuts and delays. Shamefully, the Mayor’s actions have resulted in him cancelling or delaying 22 out of 26 major infrastructure projects during his first four years as Mayor of our fantastic city.

Local Member of Parliament for the Cities of London & Westminster, Nickie Aiken, has joined forces with community activists, local councillors, neighbouring MPs Felicity Buchan (Kensington) and Greg Hands (Chelsea and Fulham) and London Assembly Member for West Central, Tony Devenish AM, to put a halt to the plans. But they need your help.

Whilst the Mayor of London's consultation closed on 7 August 2022, there's still time to sign Nickie's petition below and make your voice heard. Nickie will continue to fight for our local bus network and will keep you updated a

Three weeks left to Save Our Buses!

There's not long left to Save Our Buses! The Mayor of London's plan to abolish 22 bus routes across London will have a detrimental impact on our neighbourhoods.

His plan will cause longer, more crowded journeys, or push more people into expensive taxis and private hire vehicles.

Join the campaign to Save Our Buses!

Nickie joins forces with Greg Hands MP to Save Our Buses

Nickie Aiken, Member of Parliament for the Cities of London & Westminster, and Greg Hands, MP for Fulham and Chelsea, have joined forces to stop the Mayor of London's bus cuts.

Mayor of London, Sadiq Khan, and Transport for London are consulting on their plans to abolish sixteen bus routes across London.

The consultation to scrap a number of bus routes across central London has now closed. Transport for London will publish their report and next steps on their website later in the year.

Check back later this year