The Cities of London & Westminster 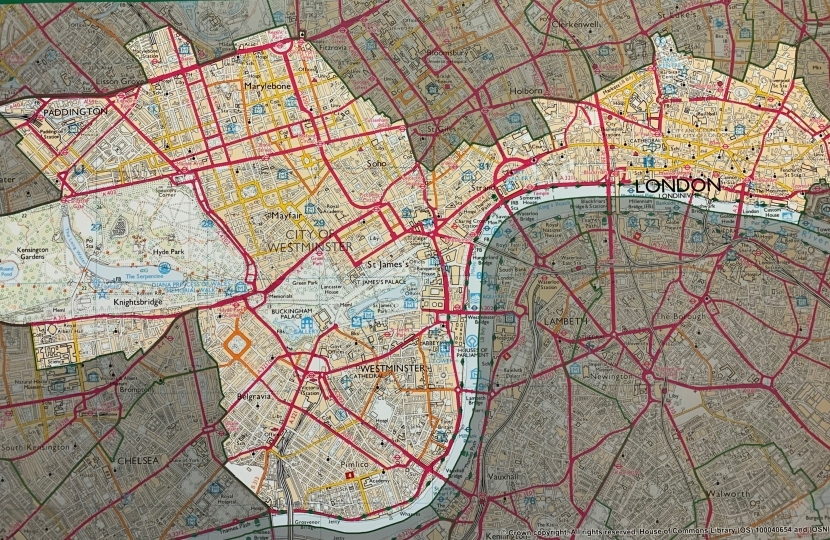 The Cities of London & Westminster constituency

The Cities of London and Westminster constituency was formed in 1950, and is created from two distinct areas: the City of London, representing the economic heart of the capital, and the City of Westminster, Britain’s political and cultural centre.

The constituency contains some of our country’s most iconic landmarks, revered institutions and famous streets, such as Buckingham Palace, the Houses of Parliament, Trafalgar Square and St Paul’s Cathedral.

It is often assumed that the constituency houses only the super-rich in the mansions of Mayfair or political figures in the Westminster village. However, the constituency actually contains a considerable amount of social housing, accommodating a uniquely cosmopolitan mix of different peoples.

The City of London is England’s smallest ceremonial county, Britain’s second smallest city and the ancient core of our capital. It has been administered as a separate entity since 886, and is run by the only completely autonomous local authority in the capital, the City of London (formerly known as the Corporation of London). The authority is headed by a Lord Mayor who is elected annually to preside over the City’s governing bodies, the Court of the Common Council and the Court of Aldermen

In the medieval period, the City was London, whilst Westminster was simply a neighbouring village. As the metropolis grew outside the City’s boundaries, the surrounding villages were enveloped and Greater London was formed.

The City used to have a significantly larger population, standing at some 208,000 in the early 1700s. However, many of the City’s residential buildings have since been converted or knocked down to make way for commercial offices, and the City has developed into a major business centre, housing the London Stock Exchange and many of the world’s biggest global finance companies. As a result, fewer than 10,000 people live in the City, and whilst the area bustles with workers during the week, at the weekends it can become so quiet that many of the shops shut.

- The UK’s first skyscraper was built in the City. It was named the NatWest Tower (since renamed Tower 42) and is 600ft high. It was Britain’s tallest building for ten years until Canary Wharf’s One Canada Square was constructed.

- The Great Fire of London in 1666 destroyed many of the buildings in the City, including St Paul’s Cathedral and the homes of an estimated 70,000 residents. Following the fire, Charles II commissioned a monument to be built near where the fire started to commemorate the event. It was designed by Christopher Wren, and is known as ‘The Monument’ after which the nearby tube station is named.

In the 11th century, the Collegiate Church of St Peter was named ‘west minster’ to distinguish it from the nearby east minster of St Paul’s Cathedral. The label stuck and the church became known as Westminster Abbey whilst the surrounding land was named Westminster.

The Abbey and the Palace of Westminster were in fact built on an island in the Thames which had been formed by a build-up of sediment in the river. Known as Thorney Island, it has since become part of the mainland after the Thames was embanked.

Westminster has now been the seat of government in England for over one thousand years, and many of the city’s most famous sites have grown up around it, making it both the cultural and political centre of London.

In 1965, Westminster was joined with the areas of St Marylebone and Paddington to form the new London borough of the City of Westminster. However, Mark’s constituency only takes in the lower half of this borough.

- Mayfair is named after the annual May Fair that took place in the area until 1686.

- Marylebone gets its name from the Church of St Mary which was built on the bank of a small stream or ‘bourne’. The church and the surrounding area became known as St Mary at the Bourne, later shortened to Marylebone.

- Covent Garden is built on land that used to be the garden of the monks from the nearby Abbey. The ‘Convent Garden’ used to provide the Abbey residents with fresh fruit and vegetables and later became a major market for fresh produce in London.

- How one of the constituency’s most famous streets, Piccadilly, got its name has been disputed. However, some say the Piccadilly name arises from tailor, Robert Baker, who built a mansion where the street now exists after making a fortune selling picadils (stiff collars fashionable in the 16th century).

About the Two Cities

Copyright 2020 Nickie Aiken for Cities of London and Westminster. All rights reserved.
Powered by Bluetree