Two Cities MP reflects on her visit to Israel and Palestine 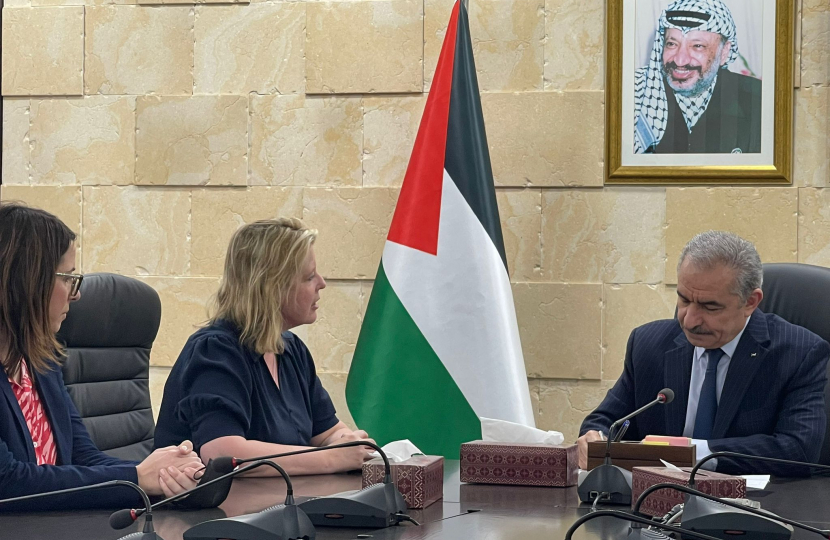 Nickie Aiken, Member of Parliament for the Cities of London & Westminster visited Israel and Palestine along with Parliamentary colleagues and Conservative Friends of Israel.

Nickie was able to meet with politicians and organisations from both sides, and chaired a meeting with Dr Mohammad Shtayyeh, Prime Minister of the Palestinian Authority.

Now more than ever, Nickie believes it is important to understand both sides; to listen and hope that we can finally bring peace to this wonderful part of the world. We must find an approach where the Palestinians and Israelis can live together in peace.

Nickie also visited the Western Wall in the Old City of Jerusalem, the most sacred place of prayer and pilgrimage to the Jewish people and a place that holds huge significance for many other religions.

Back in Tel Aviv, Nickie had the pleasure of meeting children and staff at the Save a Child’s Heart charity, an Israeli-based international non-profit organisation with the mission to improve the quality of paediatric cardiac care in developing countries. The two girls in the photo above with Nickie and Fay Jones MP are from Tanzania and are being treated at the hospital.

Nickie learnt an incredible amount on my visit to this historical part of the world, and is looking forward to continue building on these links, to ensure she can best represent our Jewish and Palestinian communities in the Two Cities.

Reflecting on her trip, Nickie commented,

"I've just finished a trip to Israel and Palestine where I've met politicians and organisations from both sides.

"I've visited the West Bank, I've been to Tel Aviv and now in Jerusalem. I've been down to the border with Gaza and it has been a really fascinating trip to understand both sides of this conflict and this issue that has been going on for decades.

"And in the week where we have seen a terrorist attack in Tel Aviv and where we've seen the fragile coalition perhaps now crumbling, it is even more important to understand both sides of the argument and to listen and to hope that we can bring peace finally to this wonderful part of the world and ensure that the people, the Palestinians and the Israelis can live together in peace."

Supercars, fast and noisy cars and motorbikes. Nickie Aiken, Member of Parliament for the Cities of London & Westminster, hears too often from local people across the constituency about the plague many cause in neighbourhoods.