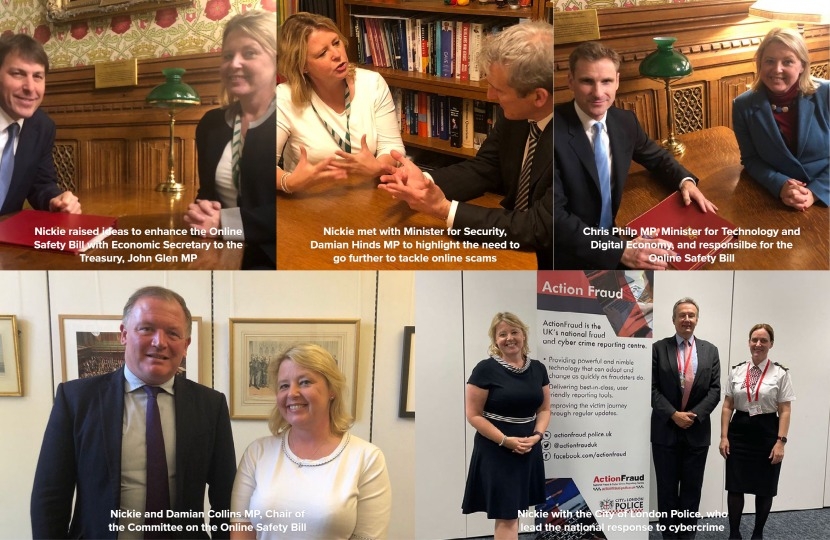 Life on the internet should mirror what is and what is not acceptable offline. Our digital safety is just as important as our physical safety.

The Online Safety Bill in its current form, rightly, places children's safety at its heart. The government will put in place a new duty of care to make companies take more responsibility for the safety of their users as well as take action in respect of illegal and harmful content.

Nickie, however, believes the Bill must go further, and we should use this opportunity to include provisions that protect and keep us all safe whilst online from scams and fraudulent messages. Omitting fraud as a priority harm in the Bill risks sending the message that it is not considered a serious threat. All the evidence points to the contrary, and Nickie is working to expand the scope of this legislation to include false and fraudulent content that leads to scams.

Nickie is also seeking clarity on how the Bill will be monitored and enforced around regulated providers located overseas.

Action Fraud, based in the City of London, believes that 85 percent of scams rely on the internet in some way, and the latest Crime Survey to the year ending March 2021 shows that a third of all crime reported in England and Wales is recorded as fraud.

The City of London Police, which lead the nation's response to fraud, also believe online shopping and auction fraud to be on the rise, with a 43% increase during 2020 compared to 2019. This activity now accounts for a quarter of all fraud reported to Action Fraud, based in the Cities of London & Westminster.

Over the last few months, Nickie has extensively lobbied Ministers including Economic Secretary to the Treasury, John Glen MP, Minister for Security, Damian Hinds MP, and Minister for Technology and Digital Economy, Chris Philp MP, also the Minister responsible for taking the Bill through the House of Commons, to push the case for why including online fraud as a priority harm in the Bill is so important. Not only for financial security, but physical security. Nickie welcomes the report from the Online Safety Bill Committee which recommends amending the Bill to include online fraud as a priority harm, and create legislation which would ensure companies took a proactive approach to preventing fraudulent activity on their sites.

As Nickie continues to make the case to tackle fraud, she wants to hear from you.

Tell Nickie your thoughts on how safe you feel online, and what ideas you have to ensure everyone, no matter their age, can use the internet safely.

Cracking down on online fraud

MP for the Cities of London & Westminster, Nickie Aiken, welcomes the Government's Online Safety Bill which began its journey through Parliament.

MP for the Cities of London & Westminster, Nickie Aiken, spoke out in Parliament during a debate on the Online Safety Bill.

As the Online Safety Bill returns to Parliament in the new year, Nickie wants to know your experiences of being online. Do you feel safe? Have you been a victim of fraud?

Beware of online scams this Christmas. We have got to take our online safety as seriously as our physical safety. Nickie is working with colleagues in government to make sure scams are included in the forthcoming Online Safety Bill and tackle online abuse in all its forms.

As the Online Safety Bill returns to Parliament in the new year, Nickie wants to know your experiences of being online. Do you feel safe? Have you been a victim of fraud? What can we do to make the internet safer?