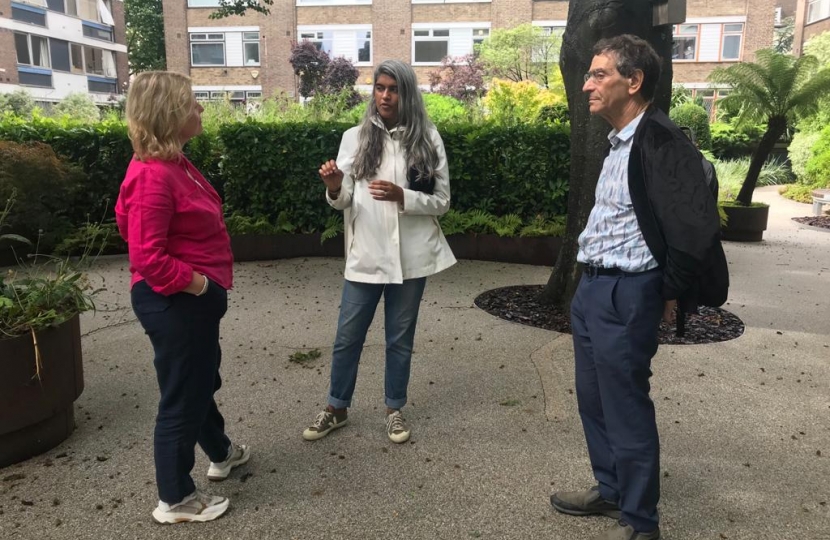 ^ Nickie met with local people in the Hyde Park Estate to learn more about their experiences of the short-term lets sector. Listen to her 'Short-Term Lets' podcast.

Add your name to Nickie's petition below!

Short-term lets are where homeowners rent a property or room on a nightly basis or over one or two days. Whilst many landlords are responsible, Nickie is well aware of the misery that rogue short-let operators can cause for local people across the Cities of London & Westminster.

That is why Nickie has launched her Parliamentary Petition, calling for the Government to introduce a registration scheme making it mandatory for anyone renting out their property on a short-term lets basis to have to register it.

Many local people have contacted Nickie to share the misery that rogue short-let operators bring, especially the anti-social behaviour, and unwanted noise from visitors arriving at all times of day and night.

Currently, the 2015 Deregulation Act allows homeowners in London to let their property for up to 90 nights. However, it is clear that too many rogue landlords are ignoring this, resulting in a rental supply problem, and hiked up rents, and despite best efforts, Westminster City Council is incredibly limited in what action they can take.

Nickie, in conjunction with Cllr Rachael Robathan, Leader of Westminster City Council, want your support to send a clear message to Ministers to halt the rise in rogue short-lettings. A registration scheme would require those renting their property to notify their local authority, in turn, empowering local authorities to notify platforms about issues with listings in their area.

“I’ve launched my campaign to call on the government to publish a Tourist Accommodation Registration Scheme. For too long, local people across the Cities of London & Westminster have put up with rogue landlords who ignore the 90 nights rule, and create unwanted disturbances all times, day and night. Letting out your home for up to 90 nights is lawful but too many landlords ignore the law and cause havoc for their neighbours. They must be held to account and a registration scheme will help the authorities know which properties are being used unlawfully and take the necessary action. If you agree with me, please add your name to my petition below.”

“We know the serious nuisance short-term lettings can cause in our neighbourhoods. From Pimlico to Paddington, Covent Garden to Little Venice and across the City local people tell us of the problems of noise, dumped rubbish and the fact you don’t know who is coming in and out of your building throughout the day and night.

“We currently have very few levers to address the matter even though we have endeavoured to bring rogue landlords to book for a number of years.

“Having a registration scheme will mean we know where the properties are and enable us to target those which cause a nuisance and exceed the 90 nights.”

If you agree with Nickie and Rachael, and want rogue landlords to clean up their act, make your voice heard, and sign Nickie's petition below.

The Government has launched a review into the effect of short-term holiday lets, seeking to improve the holiday letting market for those living in popular tourism destinations like the Cities of London & Westminster.

Nickie Aiken, Member of Parliament for the Cities of London & Westminster, led the calls for a registration scheme for short-term lets in her debate in the House of Commons Chamber.

Short-lets allow homeowners to rent a property or room over one or two days. Over the course of a year, homeowners in London are allowed to let their property for up to 90 nights.

Cracking down on rogue short-let landlords

Nickie Aiken, Member of Parliament for the Cities of London & Westminster, is leading calls for a registration scheme for short-term lets.